Everything available in our environment which can be used to satisfy our needs, provided, it is technologically accessible, economically feasible and culturally acceptable can be termed as ‘Resource’. 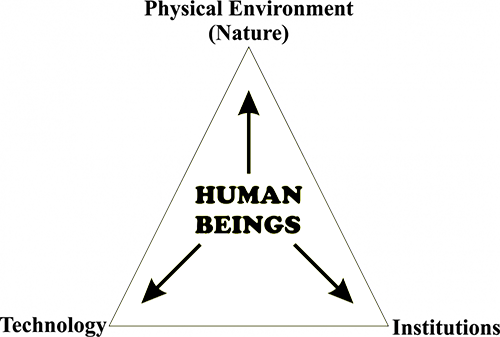 The process of transformation of things available in our environment involves an interactive relationship between nature, technology and institutions. Human beings interact with nature through technology and create institutions to accelerate their economic development.
Do you  think  that  resources  are  free gifts  of  nature  as  is  assumed  by  many? They are not. Resources are a function of human activities. Human beings themselves are essential components of resources. They transform material available in our environment into resources and use them. These resources can be classified in the following ways –

On the Basis of Origin
Biotic Resources:

These are obtained from biosphere and have life such as human beings, flora and fauna, fisheries, livestock etc.

All those things which are composed of non-living things are called abiotic resources. For example, rocks and metals.

On the Basis of Exhaustibility

Renewable Resources: The resources which can be renewed or reproduced by physical, chemical or mechanical processes are known as renewable or replenishable resources. For example, solar and wind energy, water, forests and wildlife, etc. The renewable resource may further be divided into continuous or flow (Fig.1.2).

Non-Renewable Resources: These occur over a very long geological time. Minerals and fossil fuels are examples of such resources. These resources take millions of years in their formation. Some of the resources like metals are recyclable and some like fossil fuels cannot be recycled and get exhausted with their use.

On the Basis of Ownership
Individual Resources:
These are also owned privately by individuals. Many farmers own land which is allotted to them by government against the payment of revenue. In villages there are people with land ownership but there are many who are landless. Urban people own plots, houses and other property. Plantation, pasture lands, ponds, water in wells etc. are some of the examples of resources ownership by individuals. Make a list of resources owned by your household.

National Resources:
Technically, all the resources belong to the nation. The country has legal powers to acquire even private property for public good. You might have seen roads, canals, railways being constructed on fields owned by some individuals. Urban Development Authorities get empowered by the government to acquire land. All the minerals, water resources, forests, wildlife, land within the political boundaries and  oceanic  area up to 12 nautical miles (22.2 km) from the coast termed as territorial water and resources therein belong to the nation.

Do you know that India has got the right to mine manganese nodules from the bed of the Indian Ocean from that area which lies beyond the exclusive economic zone. Identify some other resources which are international in nature.

On the Basis of the Status of Development
Potential Resources:
Resources which are found in a region, but have not been utilised. For example, the western parts of India particularly Rajasthan and Gujarat have enormous potential for the development of wind and solar energy, but so far these have not been developed properly.

Developed Resources:
Resources which are surveyed and their quality and quantity have been determined for utilisation. The development of resources depends on technology and level of their feasibility.
Stock: Materials in the environment which have the potential to satisfy  human  needs but human beings do not have the appropriate technology to access these, are

included among stock. For example, water is a compound of two gases; hydrogen and oxygen. Hydrogen can be used as a rich source of energy. But we do not have advanced technical ‘know-how’ to use it for this purpose. Hence, it can be considered as stock.
Reserves are the subset of the stock, which can be put into use with the help of existing technical ‘know-how’ but their use has not been started. These can be used for meeting future requirements. River water can be used for generating hydroelectric power but presently, it is being utilised only to a limited extent. Thus, the water in the dams, forests etc. is a reserve which can be used in the future.

Activity
Prepare a list of stock and reserve, resources that you are familiar with from your local area.

Resources are vital for human survival as well as for maintaining the quality of life. It was believed that resources are free gifts of nature. As a result, human beings used them indiscriminately and this has led to the following major problems.

(a)    What do they think about resources they use?
(b)    What is their opinion about the wastes, and its utilisation?
(c)    Collage your results.

An equitable distribution of resources has become essential for a sustained quality of life and global peace. If the present trend of resource depletion by a few individuals and countries continues, the future of our planet is in danger.
Therefore, resource planning is essential for sustainable existence of all forms of life. Sustainable existence is a component of sustainable development.

Rio de Janeiro Earth Summit, 1992
In June 1992, more than 100 heads of states met in Rio de Janeiro in Brazil, for the first International Earth Summit. The Summit was convened for addressing urgent problems of environmental protection and socio- economic development at the global level. The assembled leaders signed the Declaration on Global Climatic Change and Biological Diversity. The Rio Convention endorsed the global Forest Principles and adopted Agenda 21 for achieving Sustainable Development in the 21st century.

It is the declaration signed by world leaders in 1992 at the United Nations Conference on Environment and Development (UNCED), which took place at Rio de Janeiro, Brazil. It aims at achieving global sustainable development. It is an agenda to combat environmental damage, poverty, disease through global co-operation on common interests, mutual needs and shared responsibilities. One major objective of the Agenda 21 is that every local government should draw its own local Agenda 21.

For example, the states of Jharkhand, Chhattisgarh and Madhya Pradesh are rich in minerals and coal deposits. Arunachal Pradesh has abundance of water resources but lacks in infrastructural development. The state of Rajasthan is very well endowed with solar and wind energy but lacks in water resources. The cold desert of Ladakh is relatively isolated from the rest of the country. It has very rich cultural heritage but it is deficient in water, infrastructure and some vital minerals. This calls for balanced resource planning at the national, state, regional and local levels.

Resource planning is a complex process which involves :
(i) identification and inventory of resources across the regions of the country. This involves surveying, mapping and qualitative and quantitative estimation and measurement of the resources.
(ii) Evolving a planning structure endowed with appropriate technology, skill and institutional set up for implementing resource development plans.
(iii) Matching the resource development plans with overall national development plans.
India has made concerted efforts for achieving the goals of resource planning right from the First Five Year Plan launched after Independence.

The availability of resources is a necessary condition for the development of any region, but mere availability of resources in the absence of corresponding changes in technology and institutions may hinder development. There are many regions in our country that are rich in resources but these are included in economically backward regions. On the contrary there are some regions which have a poor resource base but they are economically developed.

The history of colonisation reveals that rich resources in colonies were the main attractions for the foreign invaders. It was primarily the higher level of technological development of the colonising countries that helped them to exploit resources of other regions and establish their supremacy over the colonies. Therefore, resources can contribute to development only when they are accompanied by appropriate technological development and institutional changes. India has experienced all this in different phases of colonisation. Therefore, in India, development, in general, and resource development in particular does not only involve the availability of resources, but also the technology, quality of human resources and the historical experiences of the people.

Conservation of Resources:
Resources are vital for any developmental activity. But irrational consumption and over-utilisation of resources may lead to socio-economic and environmental problems. To overcome these problems, resource conservation at various levels is important. This had been the main concern of the leaders and thinkers in the past. For example, Gandhiji was very apt in voicing his concern about resource conservation in these words: “There is enough for everybody’s need and not for any body’s greed.” He placed the greedy and selfish individuals and exploitative nature of modern technology as the root cause for resource depletion at the global level. He was against mass production and wanted to replace it with the production by the masses.

At the international level, the Club of Rome advocated resource conservation for the first time in a more systematic way in 1968. Subsequently, in 1974, Gandhian philosophy was once again presented by Schumacher in his book Small is Beautiful. The seminal contribution with respect to resource conservation at the global level was made by the Brundtland Commission Report, 1987. This report introduced the concept of ‘Sustainable Development’ and advocated it as a means for resource conservation, which was subsequently published in a book entitled Our Common Future. Another significant contribution was made at the Earth Summit at Rio de Janeiro, Brazil in 1992.