If you look at Maps 1 and 2 you will notice that the Mature Harappan culture developed in some of the areas occupied by the Early Harappan cultures. These cultures also shared certain common elements including subsistence strategies.

The Harappans ate a wide range of plant and animal products, including fish. Archaeologists have been able to reconstruct dietary practices from finds of charred grains and seeds. These are studied by archaeo-botanists, who are specialists in ancient plant remains. 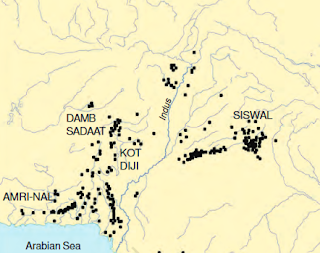 Studies done by archaeo-zoologists or zoo- archaeologists indicate that these animals were domesticated. Bones of wild species such as boar, deer and gharial are also found. We do not know whether the Harappans hunted these animals themselves or obtained meat from other hunting communities. Bones of fish and fowl are also found.

While the prevalence of agriculture is indicated by finds of grain, it is more difficult to reconstruct actual agricultural practices. Were seeds broadcast (scattered) on ploughed lands? Representations on seals and terracotta sculpture indicate that the bull was known, and archaeologists extrapolate from this that oxen were used for ploughing.

Moreover, terracotta models of the plough have been found at sites in Cholistan and at Banawali (Haryana). Archaeologists have also found evidence of a ploughed field at Kalibangan (Rajasthan), associated with Early Harappan levels (see p. 20). The field had two sets of furrows at right angles to each other, suggesting that two different crops were grown together. 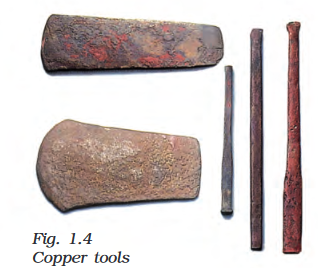 Archaeologists have also tried to identify the tools used for harvesting. Did the Harappans use stone blades set in wooden handles or did they use metal tools? Most Harappan sites are located in semi-arid lands, where irrigation was probably required for agriculture.

Traces of canals have been found at the Harappan site of Shortughai in Afghanistan, But not in Punjab or Sind. It is possible that ancient canals silted up long ago. It is also likely that water drawn from wells was used for irrigation. Besides, water reservoirs found in Dholavira (Gujarat) may have been used to store water for agriculture.

A Planned Urban Centre Perhaps the most unique feature of the Harappan civilisation was the development of urban centres. Let us look at one such centre, Mohenjodaro, more closely. Although Mohenjodaro is the most well-known site, the first site to be discovered was Harappa.

The settlement is divided into two sections, one smaller but higher and the other much larger but lower. Archaeologists designate these as the Citadel and the Lower Town respectively. The Citadel owes its height to the fact that buildings were constructed on mud brick platforms.

It was walled, which meant that it was physically separated from the Lower Town. The Lower Town was also walled. Several buildings were built on platforms, which served as foundations. It has been calculated that if one labourer moved roughly a cubic metre of earth daily, just to put the foundations in place it would have required four million person-days, in other words, mobilising labour on a very large scale.

Consider something else. Once the platforms were in place, all building activity within the city was restricted to a fixed area on the platforms. So it seems that the settlement was first planned and then implemented accordingly.

Other signs of planning include bricks, which, whether sun-dried or baked, were of a standardised ratio, where the length and breadth were four times and twice the height respectively. Such bricks were used at all Harappan settlements.

One of the most distinctive features of Harappan cities was the carefully planned drainage system. If you look at the plan of the Lower Town you will notice that roads and streets were laid out along an approximate “grid” pattern, intersecting at right angles.

It seems that streets with drains were laid out first and then houses built along them. If domestic waste water had to flow into the street drains, every house needed to have at least one wall along a street.

The Lower Town at Mohenjodaro provides examples of residential buildings. Many were centred on a courtyard, with rooms on all sides.

The courtyard was probably the centre of activities such as cooking and weaving, particularly during hot and dry weather. What is also interesting is an apparent concern for privacy: there are no windows in the walls along the ground level. Besides, the main entrance does not give a direct view of the interior or the courtyard.

Every house had its own bathroom paved with bricks, with drains connected through the wall to the street drains. Some houses have remains of staircases to reach a second storey or the roof.

Many houses had wells, often in a room that could be reached from the outside and perhaps used by passers-by. Scholars have estimated that the total number of wells in Mohenjodaro was about 700.